It's not about luck. It's about hard-work. 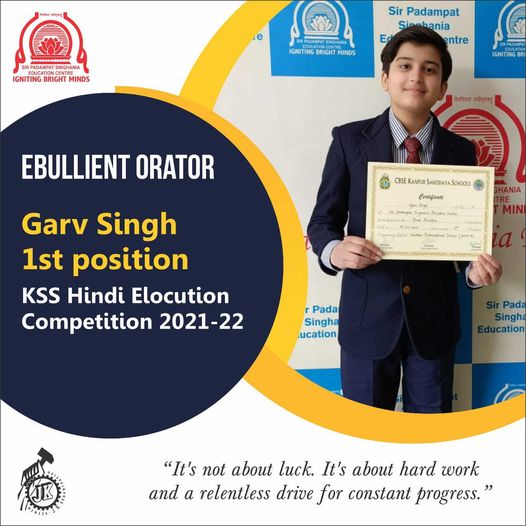 The stupendous Singhanians, once again dazzled in the arena of eloquence and panache by delivering a spectacular performance in the recently concluded Online KSS Elocution Competition, conducted by Shree Sanathan Dharma Education Centre. The contest was arranged in two groups A and B. Sampurna Rastogi (Class X) and Akshat Agarwal (Class XII) represented our school in Group A and Group B respectively. Sampurna Rastogi presented the poem A Cookie Thief by Valerie Cox and enthralled the judges with his well-timed pauses and a refined baritone. On the other hand, Akshat Agarwal, while delivering Alexander speech, left the judges spellbound with his captivating presentation. Both furnished stunning performances and romped home with the CHAMPIONS title and won the first position in their groups. 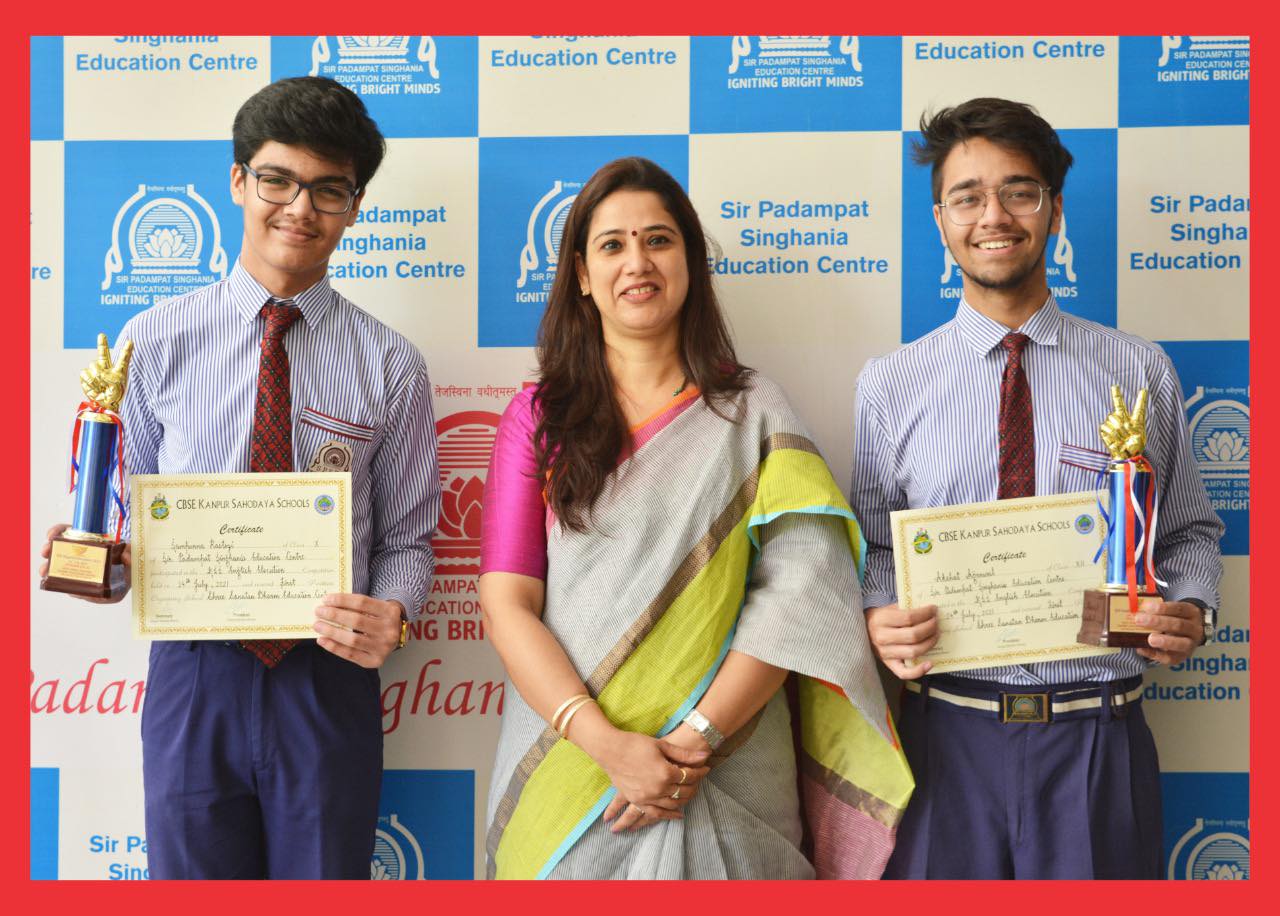 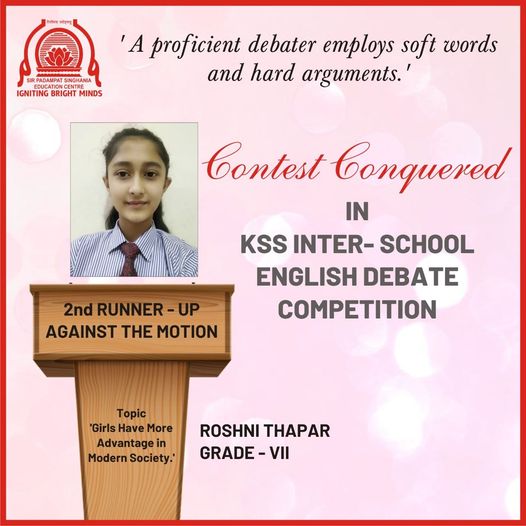 "Great speakers are not born, they are trained" ROSHNI THAPAR of Grade VII with her mastered poise and presentation bagged FIRST POSITION in ONLINE KSS INTER- SCHOOL ELOCUTION COMPETITION. ONLINE KSS INTER- SCHOOL ELOCUTION COMPETITION "It doesn't matter how many times you win an award, it is always very special". The power of the spoken word is undeniable which splashed in Young Elocutionists AKSHAT AGARWAL ( Grade XI- Group B)and KANHA AGARWAL ( Grade X- Group A) by securing FIRST and SECOND POSITION respectively in ONLINE KSS INTER- SCHOOL ELOCUTION COMPETITION.The booming speakers of SPSEC were extolled for their confidence, poise and presentation with sweeping victory. 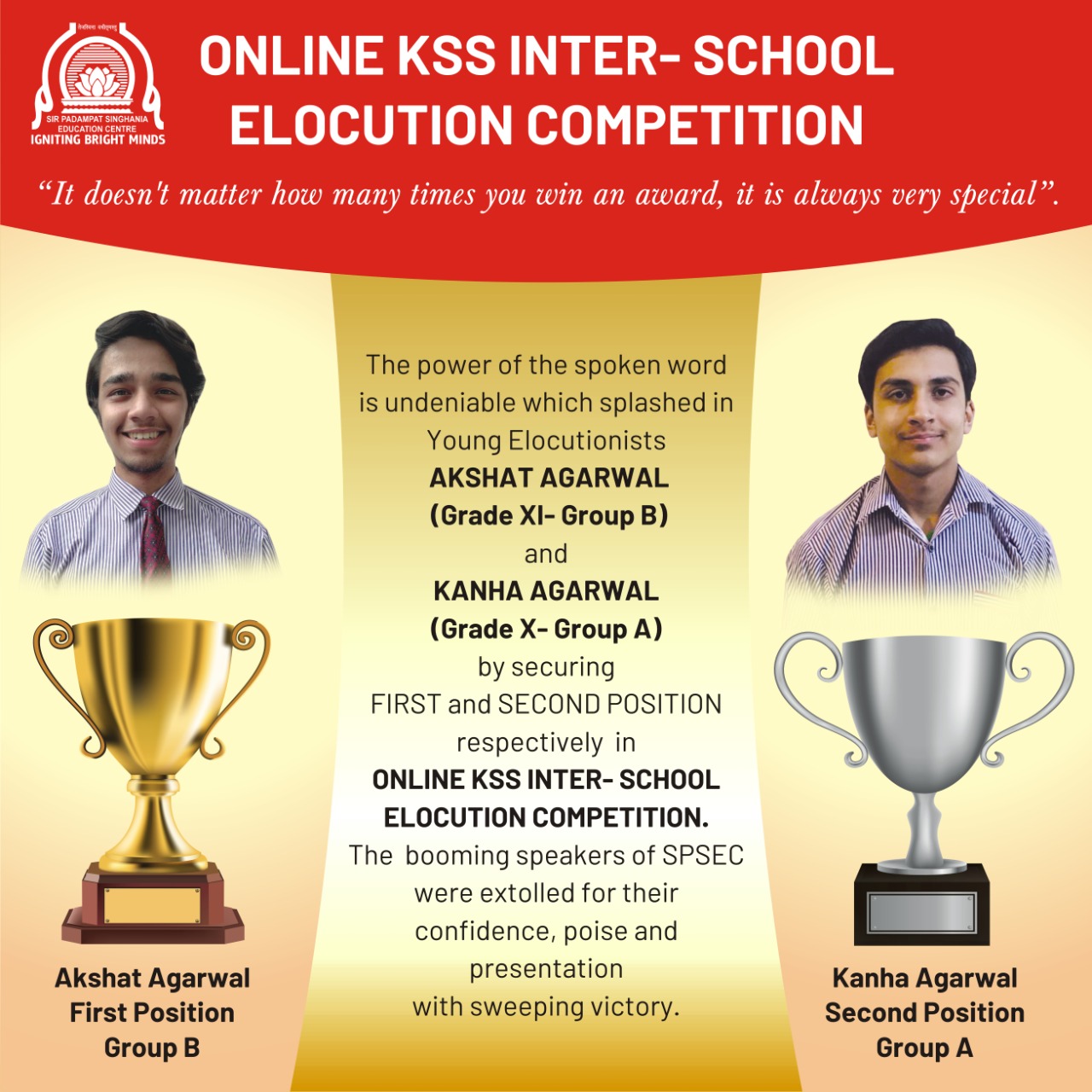 KSS Inter-school English Extempore Brevity is the best recommendation of speech, whether in a senator or an orator. SIR PADAMPAT SINGHANIA EDUCATION CENTRE BAGS 2nd RUNNER- UP POSITION IN THE KSS INTER SCHOOL EXTEMPORE COMPETITION KSS Inter-School Extempore Competition was organized by Chintels School, Kalyanpur on October 31, 2020 for Grade VI-VIII whereby the competitors had to speak over a topic given to them on the spot. Around nineteen schools from all over the city contested in this event. Sir Padampat Singhania Education Centre also participated in the competition and won the 2nd Runner-Up Position. Harshit Singh (Grade VIII) participated in the Extempore Competition from SPSEC and spoke on the topic 'Education is not the learning of the facts but training of the mind to think'. In Two minutes that was the allotted time for each contestant, Harshit spoke very fluently and confidentily and brought laurels for the school. Epic Moment Spawned By The Orators Of Sir Padampat Singhania Education Centre Eloquent Elocutionists of Sir Padampat Singhania Education Centre accentuated the glory of the school by elevating the OVERALL WINNER'S TROPHY in K.S.S. FIRST ONLINE INTER-SCHOOL ENGLISH DEBATE COMPETITION hosted by at Delhi Public School Azad Nagar, Kanpur on a virtual platform. The vibrant vanquishers of SPSEC walked away not only with the Overall Winner's Team Trophy but also bagged the Best Speaker (For the Motion), FIRST POSITION by YASH TOLANI and the Best Speaker (Against the Motion), SECOND POSITION by SUHANI KAPOOR, on the topic 'Online Education Pushes the Learners to Islands of Isolation and Self-Absorption'. They gripped the panel with their persuasive debating skills defeating 42 participants from leading and reputed schools of the city, Kanpur. These rhetoricians proved their mettle by presenting their well-articulated beliefs and fervently put forth their convictions. The Chairperson, Ms. Manorama Govind Hari Singhania, The Vice-Chairman,Mr. Abhishek Singhania and The Vice-Chairperson, Ms. Varsha Singhania congratulated the dynamic debaters and the efficacious mentors, Ms. Vibha Dwivedi and Ms. Anila Chandak on this magnificent victory. The Principal, Ms. Bhawna Gupta extended her heartiest congratulations to the team on this spectacular winning feat. 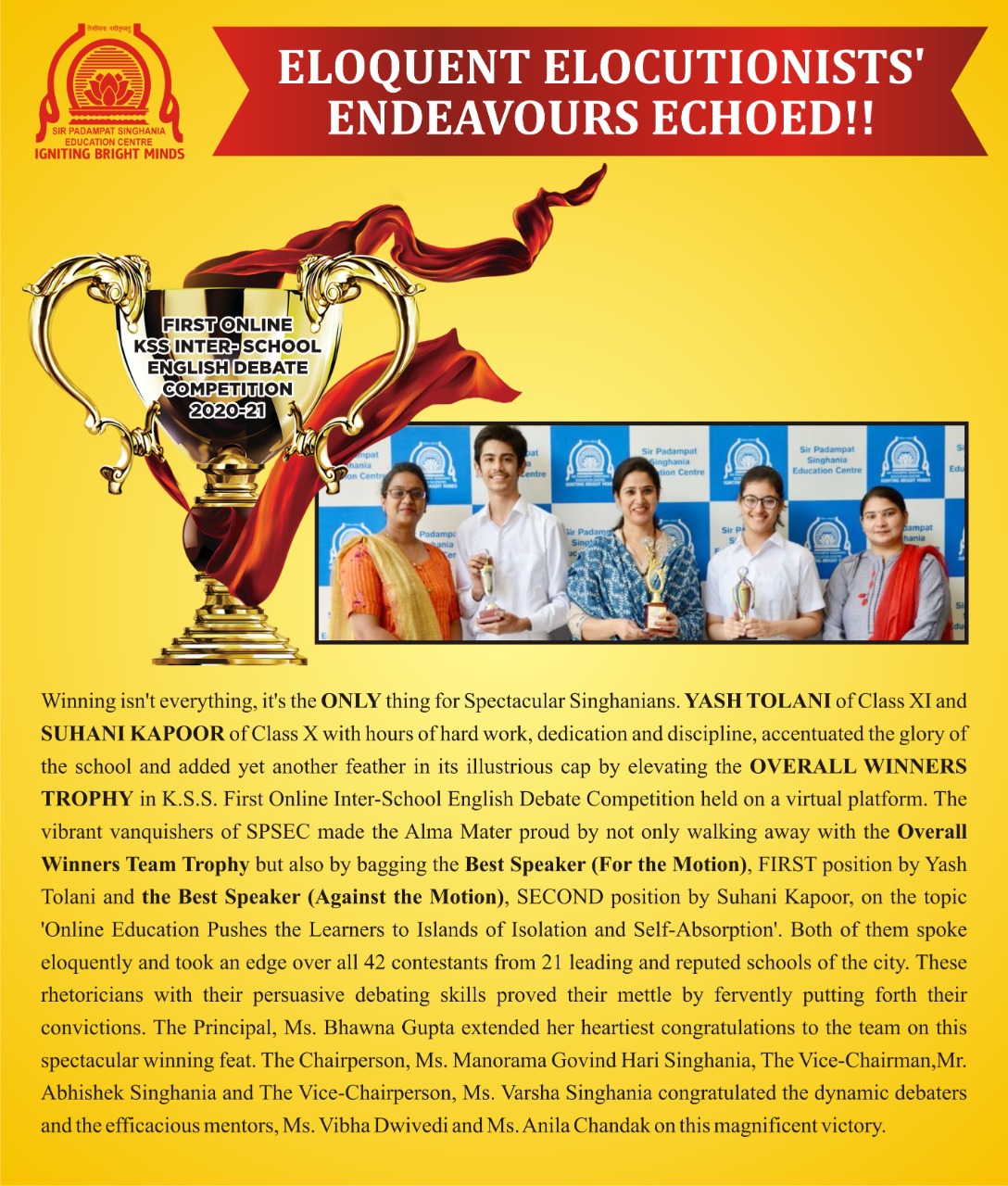 SIR PADAMPAT SINGHANIA EDUCATION CENTRE BAGS SECOND POSITION IN THE KSS INTER SCHOOL STORY TELLING COMPETITION KSS Inter-School Story Telling Competition was organized by Scholar Mission School, Baikunthpur on October 3, 2020 for Grade I-V whereby the competitors had to narrate a story freestyle that conveyed a message. Around fourteen schools from all over the city contested in this event. Sir Padampat Singhania Education Centre also participated in the competition and won the Second Position. Avani MIshra (Grade V) participated in the Story Telling Competition from SPSEC with a self written story based on the conversation between a girl child and her parents. The conversation was in regard of the child's expression to her psyche at the tough time of this pandemic. The girl asked her parents why all humans have been using nature as a credit card without any spending limit. She enquired her parents where she was wrong and why she had to face all this. In four minutes that was the allotted time for each story teller the story took a good shape and opened the mind and eyes of all the listeners. It became the victorious story. 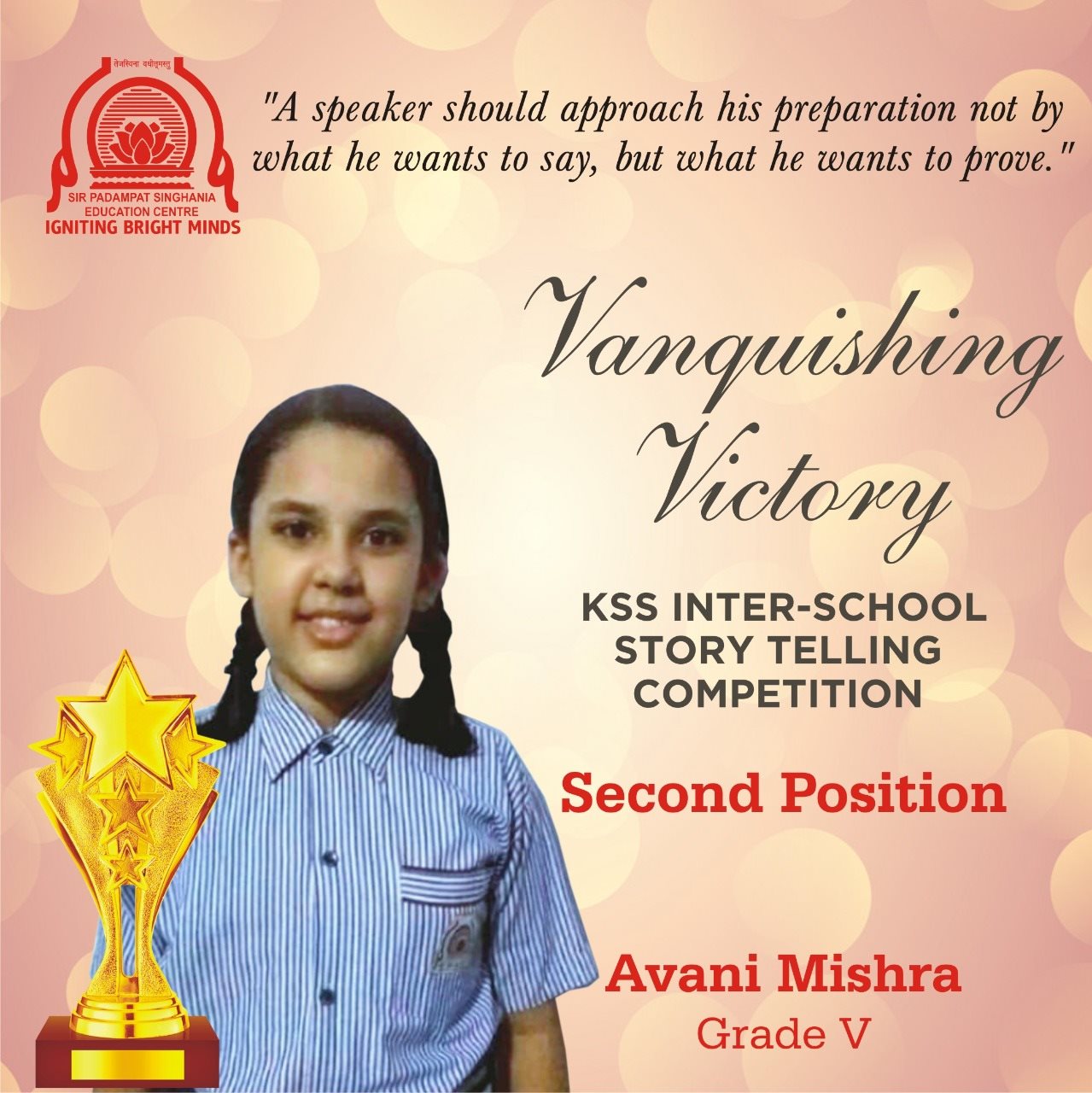 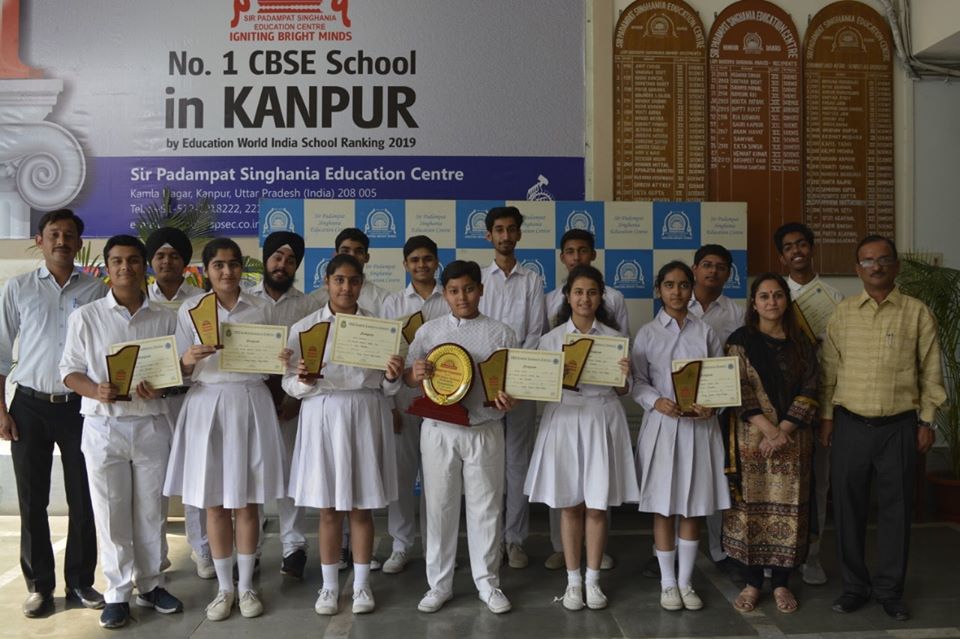 Kudos to the Winners !!! The spellbinding performance of the school Orchestra Team hypnotised all in KSS INTER SCHOOL ORCHESTRA COMPETITION with the rhythmical and synchronous instrumental beats and majestically won the RUNNERS UP TROPHY with befitting participation. Exultation and Jubiliation !!! The star-studded girls basketball team of SPSEC triumphantly bagged OVERALLL WINNERS TROPHY in KSS GIRLS BASKETBALL TOURNAMENT with their winning goals. The spectators praised the players for turning the final match to a breathtaking stage. 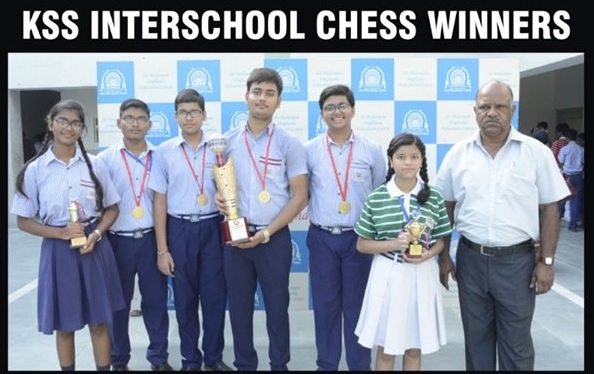 The Chess Team of SPSEC lifted the championship trophy with its magnificent performance in Interschool Chess Championship held at Dr. Soney Lal Patel School, Kanpur. The participants were awarded with gold medals and certificates. Winning isn't everything, it's the only thing. Singhanians are getting addicted to winning for which their enthusiasm and passion blended with dedication makes them unparalleled. Once again Singhanians proved this by lifting ' The Winners Trophy ' in the K.S.S Table Tennis Tournament- 2019, held at DPS Azad Nagar.SPSEC proudly secured the Championship Trophy in both the categories (Boys Team and GirlsTeam) in all 19 schools participated. SPSEC pridefully secured 6 medals (4 Gold + 1 Silver + 1 Bronze).In the Individual Senior Category Shrishti Mishra bagged Gold Medal and Omji Pandey secured Silver Medal.In the Individual Junior Category, Aaryan Arora bagged Gold medal and Kenisha Jaiswal secured Bronze Medal. The budding and dynamic debaters of SPSEC- HARSHIT SINGH of grade VII and PAAWANI MISHRA of grade VIII made their alma mater proud as they held aloft a glittering trophy when they bagged RUNNERS UP POSITION in KSS INTER SCHOOL HINDI DEBATE COMPETITION. Harshit Singh was awarded with the first position in individual category for his oratory skills and proved his arguments with conviction speaking for the motion on the topic -'PARYAWARAN KI UPEKSHA TRITYA VISHWA YUDH KO JANM DEGI'. 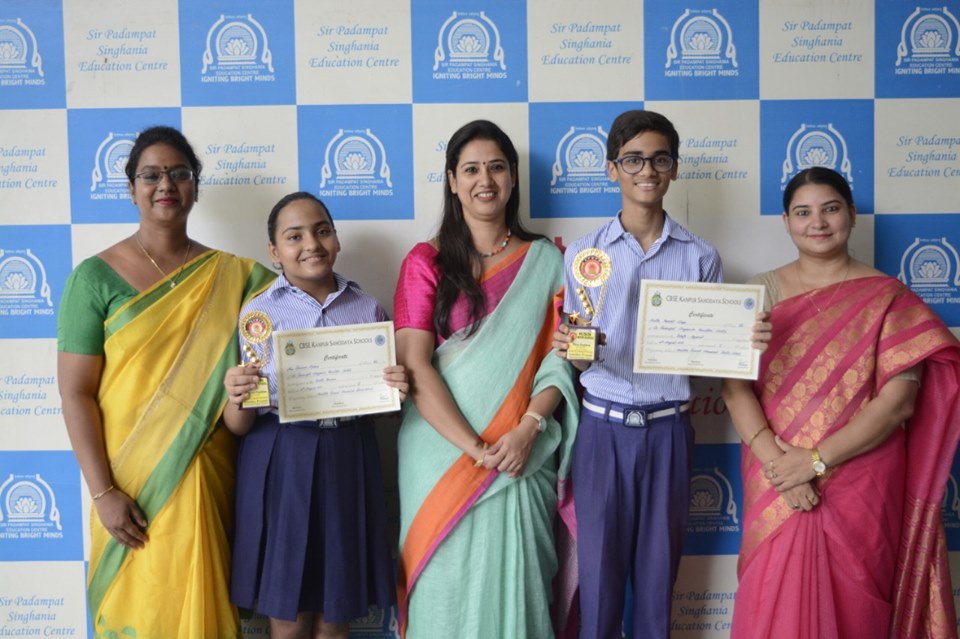 Empowered the Power !!! The power of the spoken word is undeniable and it splashed in the young debaters of SPSEC in KSS Inter School English Debate Competition organised by Ambika Prasad School on the topic - "DO EXAMINATIONS DETERMINE INTELLIGENCE?" Harshit Singh of grade VII and Pawani Mishra of grade VIII with their eloquent debating skills secured the FIRST and SECOND POSITION consecutively in individual categories and triumphantly bagged the OVERALL WINNERS TROPHY. The participants presented their well-articulated thoughts and vehemently put forth their convictions . 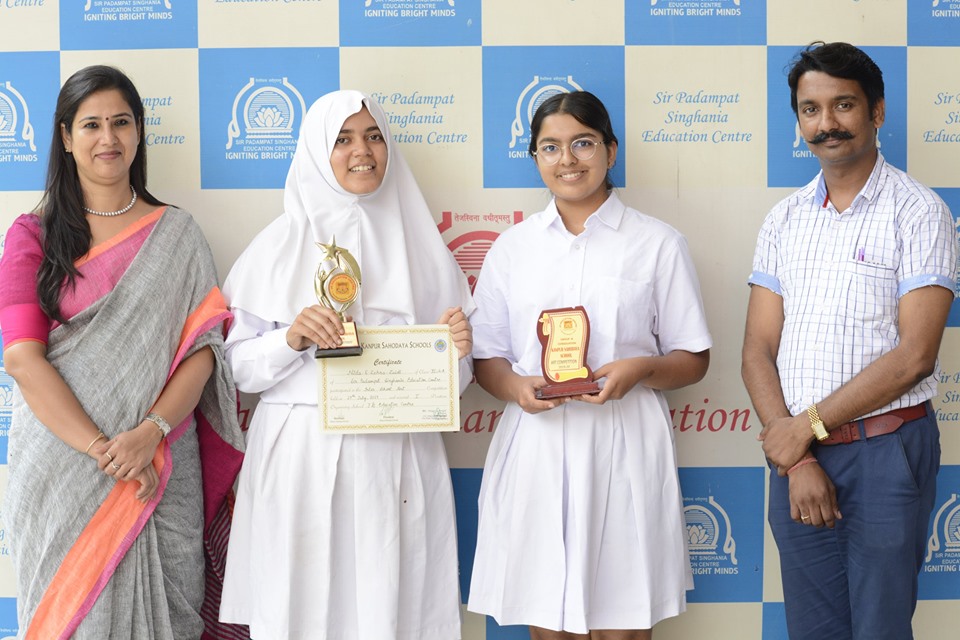 Dedication, when blended with passion and enthusiasm breeds achievement. The splendid and stupendous performance of the student of SPSEC - Nida-E-Zaira-Zaidi brought laurels to the school by bagging the first position (Group A) in K.S.S. Inter School Art Competition held at J.D. Education Centre, Kanpur against 32 counter participants on the topic ' Social Media-The Time Killer'.

The skill of hand-eye coordination displayed in her art-piece was delightful to the sight of judges. In Group B- Devanshi Jain was also awarded with the consolation prize for her subtle transitions in using colours of different combinations.

The Principal, Ms. Bhawna Gupta extended her heartiest congratulations to the students on their stunning achievements . 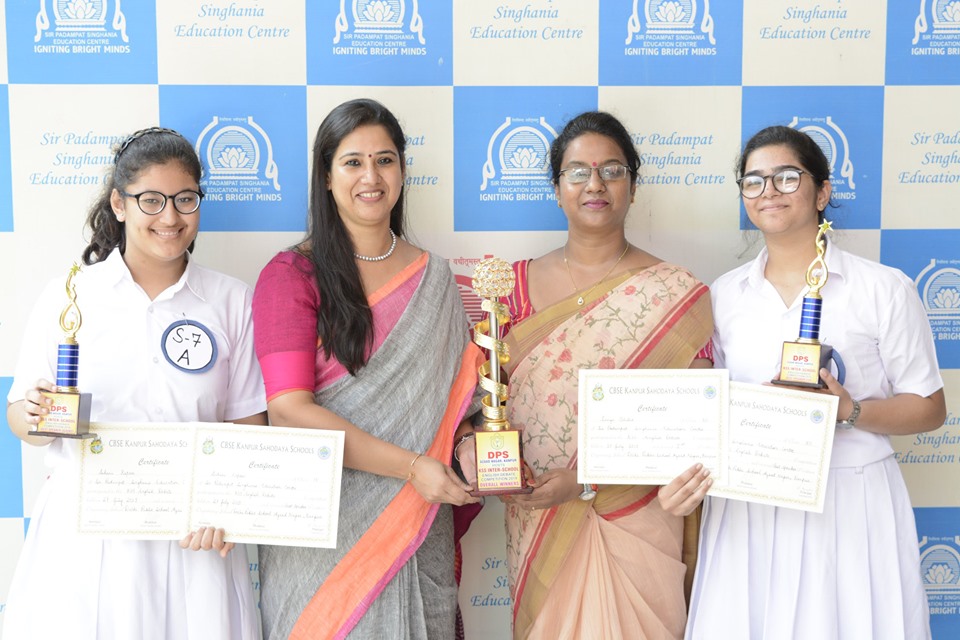 The promising and propitious speakers- Sanya Bhatia and Suhani Kapoor walked away not only with the Overall Winner's Trophy but also bagged the Best Speaker's Trophy by speaking on the topic " Politics is No Longer an Attractive Career for the Educated Youth". With their eloquent debating skills defeating 44 participants in the competition the Singhanians proved their mettle by presenting their well-articulated thoughts and vehemently put forth their convictions.

The Principal, Ms. Bhawna Gupta extended her heartiest congratulations to the students on this spectacular achievement.